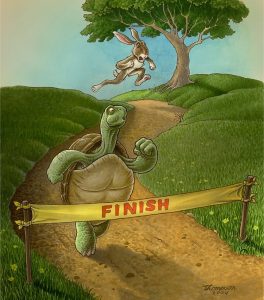 My Dad once told me the story about the “Tortoise and the Hare!” Aesop’s message was “Slow and steady wins the race!” I don’t remember the particulars surrounding this “Dad-ism,” but I do know I’ve thought about it a lot in various situations. My son Andrew has autism, is moderately mentally handicapped and has fine motor skill deficits. But this boy has come a long way in his 14 years. His progress has been SLOW, but it has also been steady!

Ar first he was completely non-verbal, except for the sign language Giff and I taught him. I longed for the day to hear him say, “Love you, Mama!” Today, thanks to many people in our lives — professionals and nonprofessionals — Andrew is stringing together longer and longer sentences and is able to communicate somewhat effectively. We still have to translate at times, but he’s come a long way!

• He does not know how to read, but he finally learned how to write his name.

• He is still incontinent, but he goes in the bathroom some of the time.

• I have to brush his teeth after he’s done just to make sure he does a good job, but he makes a valiant effort! (He even let’s me floss his teeth sometimes.)

• He is still difficult to understand at times, but we push him to advocate for himself when getting a drink refill at Chil-Fil-A

But for all these victories and more, I still applaud his efforts even if they are not met with absolute success. Where would he be if he stopped trying? What kind of parents would we be if we had no expectations on him? I will choose to celebrate the in-between of what is and what will be. 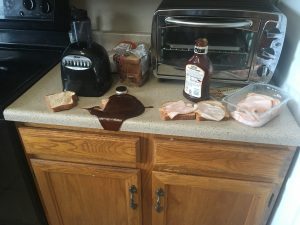 And so, because he tried to make his own BBQ Ham sandwich while I was outside, I will CHOOSE to say, “Good job, Andrew! Nice try!” When inside I really want to say, “WHAT THE HECK!!!!!!!!!”

I am not saying I have done this perfectly because I have not! I’ve seen my words crush my boys at various times, and I’ve also seen my words make them smile and walk a little taller knowing their dad and I are in their corner! What I AM saying echoes Frederick Douglass’ words below. 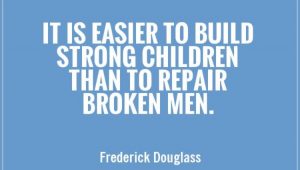 PS: I will let Andrew try to make his own sandwich again tomorrow–even if there’s BBQ  involved! 😬