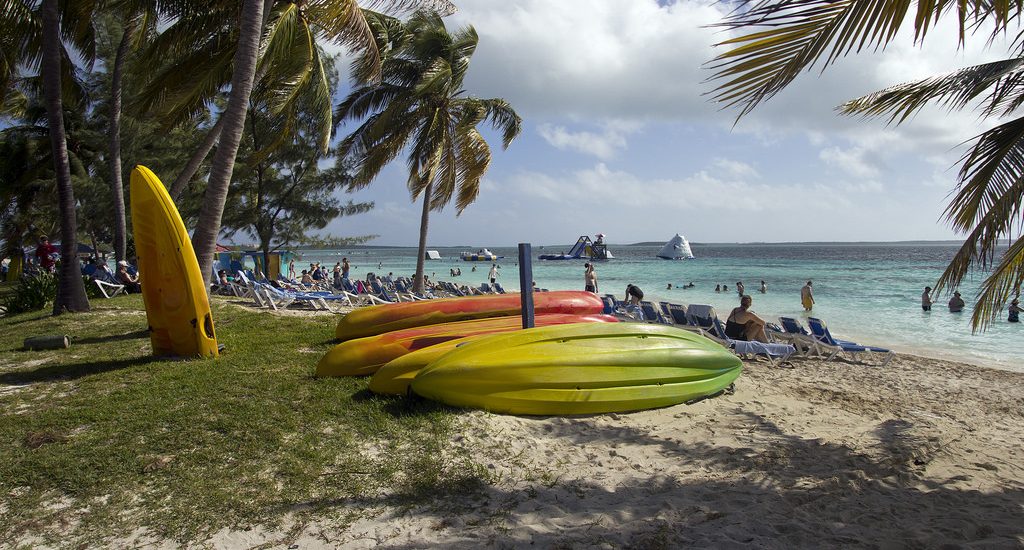 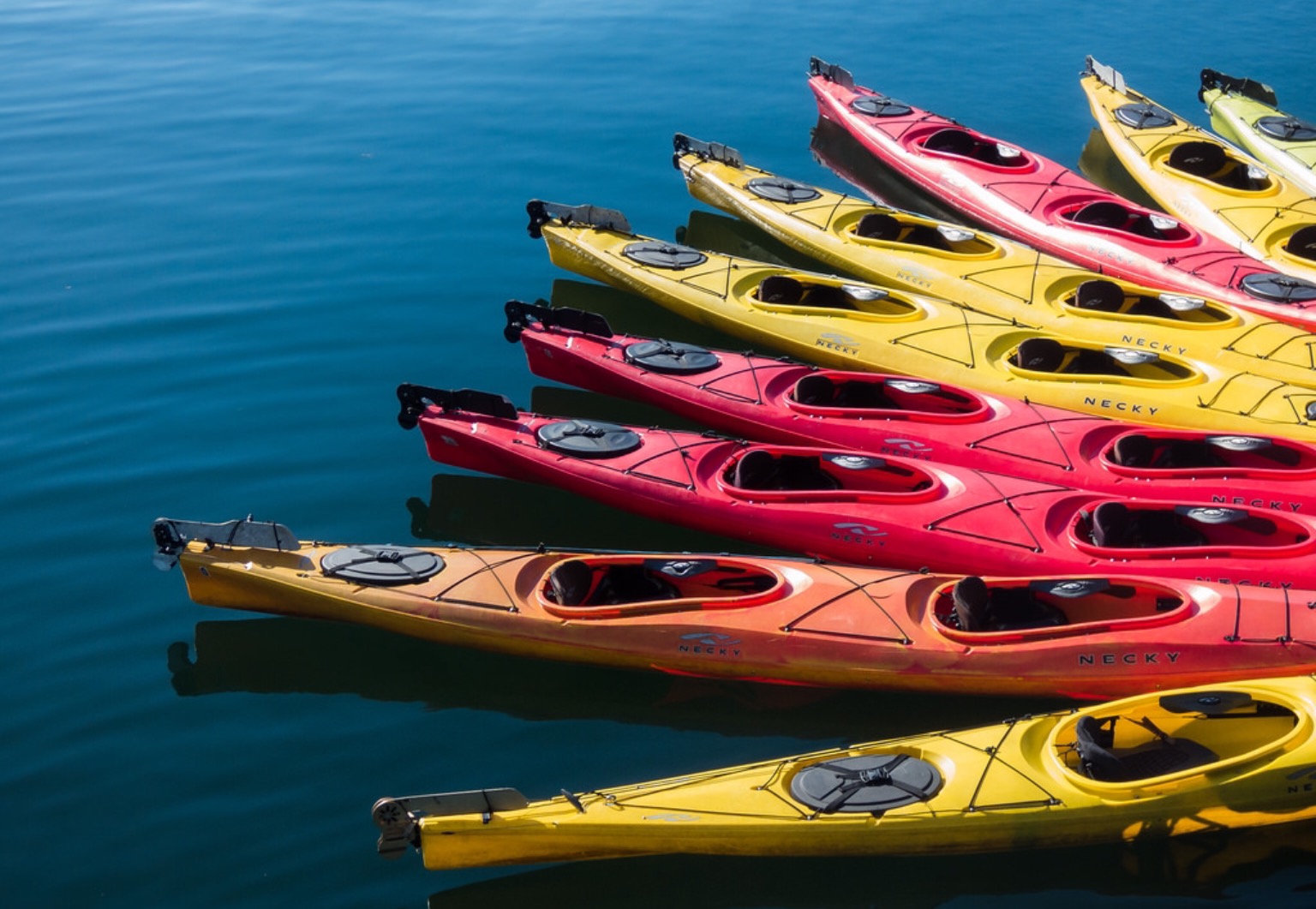 Several years ago, Giff and I were privileged to be able to enjoy a cruise to the Bahamas, courtesy of his parents. Soaking up the sun and getting in as much rest and relaxation together was exactly what we needed. We left our three young boys (at the time) with family who graciously agreed to watch as we set sail for Nassau, Bahamas.

After pouring over all the activity brochures, we decided we would embark on a kayaking adventure – something we’d never done before. Our adventure would begin at Coco Cay, a private island owned by Royal Caribbean Cruise Lines. We made our way onto the island and headed directly over to the tour guide, eager to get the “how-to” formality out of the way. How difficult could it be, right?

Pushing out from shore proved to be quite comical as we had a little bit of difficulty getting into the kayak as it was making its way out from under us. But, we strapped ourselves in and we were ready to go! This was turning out to be a little more complicated than a 15-minute coaching session alluded to. There was real skill needed—skill we obviously didn’t have…yet!

A few minutes into the expedition, Giff and I noticed the others who signed up for the kayak tour were a little farther ahead of us. They seemed to be enjoying some sea life as they effortlessly glided along the water. Eagerly wanting to join in the fun, we both started paddling as quickly as we could, but we were getting nowhere! Matter of fact, we were going in circles! It must have been quite a sight for the others to see us spinning around not making any headway.

When we finally realized we were paddling against each other and not with each other, Giff and I started to paddle in unison and stopped going in circles. We were then able to head over and join the other seafarers who were appreciating God’s creation in the sea. As soon as we reached the group, I leaned over to see what they were looking at—a sting ray! Suddenly, Giff and I were no longer on our kayak; we were in the water with the sting ray! This wasn’t on the activity brochure – “Swimming with the Sting Rays!” After having some words with each other, playing the blame game and turning red from embarrassment, we got back onto our kayak thankful the sting ray wasn’t directly under us.

Capsizing our kayak must have affected me more than I realized, because with every subsequent move Giff made, I tensed up and overcompensated in the opposite direction in which he wanted to take us.

“Julie, relax! You have to trust me!”

“Giff, where are we going? You have to communicate more!”

Things were getting tense, to say the least! It became painfully clear that God had more than enjoying an outdoor sport in mind for us that day. He was showing us a word picture. Kayaking became a parable about our marriage! 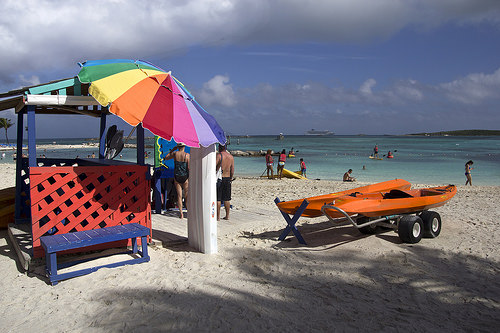 KAYAKING: Both the Captain and the Crew have to paddle together in unison! If they don’t, they will not get anywhere, go in circles, or clash their paddles possibly hurting one or both people.

MARRIAGE: “For this reason a man will leave his father and mother and be united to his wife, and the two will become one flesh. So they are no longer two, but one flesh” (Mk. 10:7-8, NIV).

We are called to live in unity with our spouse. We are one flesh! As husband and wife, we are no longer supposed to act independently of one another. We are a team! Together, we can move in the direction God wants to take us more easily than if we were moving in opposite directions.

MARRIAGE: There is one HUSBAND and one WIFE! There can only be one husband and one wife! This is God’s plan! In marriage, we are both in the marriage, but we have different roles. One is not better than the other, and one is not more important in the marriage than another. We are equal before God, but we each give a different expression of Who He is!

“Woman was created from the rib of man
She was not made from his head to top him,
Nor from his feet, to be trampled upon.
She was made from his side, to be equal to him.
From under his arm to be protected by him.
From near his heart to be loved by him.” (Author Unknown)

The first mate’s responsibility is to relax and to move in sync with the captain’s steering and not work against it. Being in the front, the first mate has a visual advantage that the captain doesn’t have. The first mate can see potentially dangerous areas in which they shouldn’t travel.

MARRIAGE: In our marriage, Giff has had to learn to communicate more. He hears from the Lord, but he processes things inside. “Still waters run deep!” There is a wealth untapped inside of Giff. But if I could only get him to share it with me now and again! We have to regularly schedule time to talk. I don’t know about you, but our house is busy and loud most days. It takes a conscious effort to communicate on a level deeper than what’s for dinner, who will take Zach to guitar lessons, and have you paid the utility bill.

It’s a journey of becoming one! The more I live with Giff, the more I can anticipate his moves and I don’t have to fear anything. I can relax and trust him. It doesn’t happen overnight; we are always in process, but I can relax! As my love is being perfected in Christ, I have less to fear in my relationship with Giff!

No comments yet
kayaking marriage